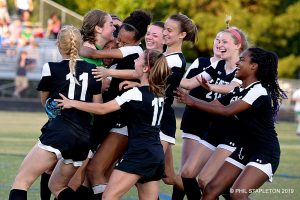 aka The Match That Refused To End

An intense, scoreless match through all regulation time,
extra time and golden goal time.
Even the best of 5 PKs resulted in a tie.

It made for a very long and late night for all the Wildcat faithful.

And, also, we were grieved to find out the next morning that beloved educator and founding principal of East Chapel Hill High, David Thaden, had succumbed to cancer that same evening. It would seem, in retrospect, that the Women’s Soccer Team carried the mantle of his memory, and the legendary teams that thrived under his auspices, as they progressed through the rest of the tournament. 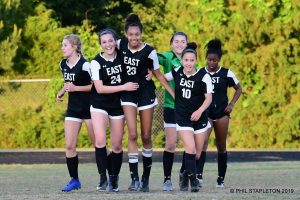 aka The Rubber Match

East finished 13-1 and won the conference title. Northwood ended at 9-5 and tied for 3rd with Northern.

This time they didn’t meet as conference rivals.  East was the #6 seed and Northwood was the #19 seed.  More than honor was on the line, the winner would advance to the quarterfinals.
So, on this cool mid-May evening, it was back to square one.

Amid an extremely close match it was only Brynn Adams’ goal at 5:15 in the first half that separated the two. 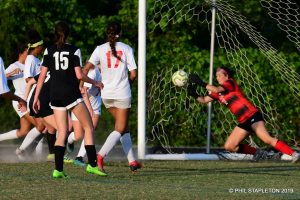 aka The East Regional Semi-Final

The lone goal was best described thusly:
“Jooste hammered twice and then Jeske drove in the winner.”

From the Jacksonville Daily News:
“They probably had a few more opportunities than we did, but we played hard,” JHS coach Dave Miller said. “The game was played 18 to 18. They had something in front of the goal and they knocked it in. We pushed late, but we couldn’t find the net. ‘”

Both longtime tournament players, the Wildcats and Cardinals paths finally collided in the 2019 3A quarterfinal match. 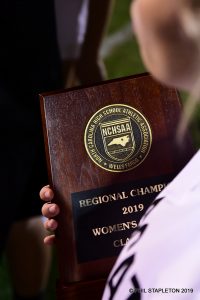 aka The East Regional Final

The Wildcats dominated in the first half and by netting a pair of goals before halftime effectively put the Comets on their heels for the rest of the match.

East got on the board as Anna Ford dribbled in from the left sideline and let loose a cannon shot that just whizzed past the Comets’ keeper’s outstretched hands into the right front corner at the 19:33 mark.

The Wildcats’ second score came on a corner kick by Sophia Coon that Emma Jeske headed in between two defenders and the goalie at the 7:29 mark.

East had not been to a championship match since 2004 when it won its third title. It was Comet’s winningest season in Clayton High School history and was only the third time this season that they had been shutout. 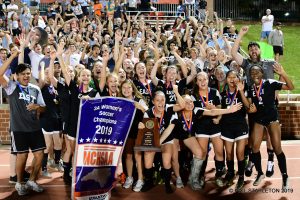 aka The State Championship

It was the goal that came so early into the match, 38:10 to be exact, that set the tempo and momentum for the entire match that followed.

After Roberson took a shot on goal Abby Davis brought the ball across center midfield before passing ahead to Sophia Coon. She then passed to Anna Ford on the left wing who instantly threaded a dart crossfield to Kate Sheslow who was slicing in from the right wing. She met the ball very near the endline and booted it back to the center where Coon waited and drove the ball into the back of the net.

Fifteen minutes later, 23:07 to be exact, saw Coon dribbling the ball up the left side looking to all the world like she was waiting for a passing lane to open. Instead, from almost 30 yards out, she unleashed a cannon shot that was going to pass under the crossbar.  Roberson’s goalie, #33 Amber Gay, was able to get her fingertips on it and deflect it upwards into the crossbar. For a second or two it appeared she had gotten the save as the ball seemed to come straight down from the crossbar but as she struggled to wrap the ball up it became apparent that the ball was indeed across the goal line.

From the Asheville Citizen-Times:

“The sad part of every season is that only one team can win it, but that does not mean that this season was not a success,” Roberson coach Josh Martin said. “We’ll remember this game, but we’ll also remember a lot of the good things. We thought we had a good shot tonight, it just didn’t go our way. We would’ve liked to bring one
home.”

The Wildcats did not allow a single goal through the entire NCHSAA tournament.

“One of the biggest differences in our team this year is the senior leadership,” head coach Austin Collins said when asked if he think this portends a return to that past form. “What they’ve done to show the younger girls how you can conduct yourself and how you can help manage the program. So they’ve just led by example, and hopefully in the future all the generations younger than them will see that it’s possible and just takes hard
work.”

The 3A Championship Match MVP went to East’s Sophia Coon who scored both of the Wildcats’ goals.

Photos by Phil Stapleton and entire tournament gallery is here.